With that being said, it is not all that easy to find a reliable dirt bike exhaust system worth your money. They are not that cheap, which makes buying one a bit of a risk. I have ridden with many different brands and exhaust systems in my time and I know how different they can be.

In this review I’m going to introduce you to the very best dirt bike exhaust systems of 2019, so that you could make easy and reliable buying decisions, you can be sure you wont end up regretting. This model, the Factory 4.1 RCT FMF is an illustration of what can be achieved with the the best materials and an eye for improving the relevant technology. The main benefit of the new system lies in the manner in how it elevates and refines the exhaust pressure wave for optimal power output. The new model also does great at lowering the sound level, which is a win-win for anyone looking for more power and a quieter bike.  The overall length of the motocross exhaust system is shorter, which makes it less likely to be damaged when the bike crashes. The exhaust is constructed only from aerospace grade materials and is entirely manufactured in an FMF Factory.

Why is it better than stock exhaust?

For starters I need to say that the Megabomb header is one of the biggest engineering breaktroughs that FMF ever had. It can give your bike a boost up to 3HP, while simultaneously decreasing the noise level by 1.5 dB. The Megabomb header is widely used in Factory teams and has gotten a lot of really good feedback from one of the best riders in the world. This motocross exhaust system was created with professionals in mind. It is built on the feedback of pro riders and made in accordance with AMA Motocross and Supercross regulations. This fact alone hints that there must be be something special to this dirtbike exhaust system.

This particular dirtbike exhaust system is made entirely out of titanium (head pipe, canister and mid pipe) with the exception of the head cap, which is made out of carbon fibre. This system presents a clear upgrade in power, compared to the old Ti-5. Its a solid choice if you’re looking for improved durability and overall performance.

In my opinion its also one of the best looking models out there.

Perhaps the biggest downside is that it won’t pass FIM sound requirements, which means that you’re not allowed to ride in Europe under FIM. This unfortunate prohibition has kept some riders out in Europe, aswell as in the States. Nevertheless, when you are riding the AMA amateur series, theres no such issue. A considerable bonus though is its removable USFS spark arrestor, which means that you can quickly switch between off-road and close-course racing spark arrestors!

Here are the main features to notice: Other than the aluminium exhaust, all the information is exactly the same as with the previously mentioned FMF model. The only difference being that the way in which the system is composed the titanium performance exhaust ends up being a tad lighter. 0.4 lbs lighter than the aluminum one to be exact. On the other hand, the titanium exhaust is more easily damageable. So it ends up being entirely your decision to make here – whether its lightness or hardness that matters to you more.

So the key features are:

All in all, its quieter and smoother than the MegaBomb. Just as could be said of all the other models and their respective companies mentioned here, the Evolution is the biggest achievement in dirt bike exhaust systems for Akrapovic. This means that you can be sure that either the technology, materials or both are of the best possible quality and functionality. The Akrapovic Exhaust Evolution is exactly that, which is backed up by many Motorcross teams who have given it a lot of praise and wouldn’t think of changing it for anything else.

Many make the claim that this is the very best performance exhaust system on the market right now and the price of 1304€ accordingly hints at that. Really, every one of the Akrapovic exhaust systems is unique in its own right, with its own particular standards that make it perform like nothing else of its kind. The value of this model here is that it improves the performance of the engine, while at the same is markedly lighter than many other systems.

Just like most of the motocross exhaust systems built by the other manufacturers, its made entirely out of titanium, which is the lightest and strongest material you can use for that part, while still maintaining a reasonable price.

If you exchange your stock exhaust system for this, the first thing you’re going to notice is the extra power you’re going to get from it. On top of that, this system is really easy to install, it took me 25 minutes to do so and it fits perfectly.

It also easily meets both FIM and AMA sound level requirements so the sound level won’t be problem anywhere, though it is slightly louder than with the FMF one.

You should be pretty happy with the weight of this model aswell, as its really very light, weighing only 3kg (6.6 pounds). Like with any other piece of gear, every development begins with extensive testing and improving. That’s exactly how this motocross exhaust system came to life. It was tested by Honda Red Bull Racing Team over several years which taught them how do go about manufacturing the trully next level in dirt bike exhaust systems.

The biggest breaktrough is the improved handling thanks due the lower centralized mass coefficient. And of course, this is in addition to the increased power and lightness that this particular model in exhaust systems now has.

The RS-4 muffler features a new front cap design that functions as a polyresonant chamber, this means that the muffer is a lot quieter than before and mid and top power is in fact improved hugely.

With the full system you get:

Here are some points that came out when testing:

(be sure to choose the right year, make and model from the site). Make sure to also check my fresh review on the best pistons for motocross. Dirt Bike Parts
One thing that is consistent amongst dirt bike riders is the tendency to become brand loyal. This loyalty applies to… Dirt Bike Parts
Most of us are very familiar with engine oil. We know that the engine oil level is on our regular… Dirt Bike Parts
As with any high-performance machine, dirt bikes need regular mechanical attention for them to run at their full potential. Service… 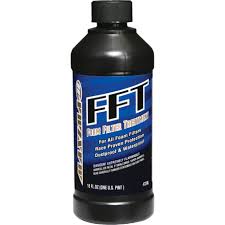 Dirt Bike Parts
Air filter oil is used with certain performance air filters. The filters themselves are made from a foam type material… Dirt Bike Parts
It is pretty much unheard of to meet someone who isn’t familiar with the Michelin brand. We see it everywhere… Hello and welcome to Motocross Advice! My name is Martin Varrand and I have been riding motocross since 4 years old. Since then I have been 2-times junior World Champion and 6-times Estonian Champion. I retired from PRO racing over 10 years ago and since then my focus is on helping other riders. From Motocross Advice you will find everything to ride faster, safer and more comfortable than ever before!

Motocrossadvice.com is a participant in the Amazon Services LLC Associates Program, an affiliate advertising program designed to provide a means for sites to earn advertising fees by advertising and linking to Amazon.com.

The most read articles on Motocross Advice How To Clean and Maintain Dirt Bike Helmet – The Proper Way